Two years in the planning, a century in the making - Illinois Farm Bureau® (IFB®) celebrates its 100th anniversary today! Birthday cake and ice cream from our favorite co-op dairy will be part of the festivities. Prairie Farms Dairy began in 1932 with a few cooperative creameries in Illinois. Today with more than 800 farms and 24 plants, Prairie Farms ranks among the top 20 dairy co-ops in the country; processing 1.8 billion pounds of milk per year.
COUNTRY Financial CEO, Kurt Bock will present a gift to honor today's anniversary; ten new museum-quality cases that highlight great moments in the history of the Family of Companies. From the IAA Building lobby stairs you can see three gifts COUNTRY has presented to IFB over the years: Illinois Countrysides tapestry, the bronze farmer statue, and now the new history display outside of COUNTRY Auditorium. IFB first ventured into the insurance business in 1925. Today, that insurance business has grown to exceed $3 billion in annual revenue and earn it the 681st spot in the Fortune 1000.
In 1919 IFB adopted the slogan "Organized for Business" and it's business enterprises have been overwhelming successful. An early IFB co-op the Broom Corn Growers Association may no longer be needed but GROWMARK's $10 billion in annual sales is a major ag cooperative accomplishment.
Illinois was the first state Farm Bureau® to reach 100,000 members.
Illinois has provided more years of leadership to AFBF than any other state.
Through out the past 50 years delegates from IFB have visited more than 30 countries on five continents to promote Illinois agriculture.
Through out the last century Illinois Farm Bureau has been a positive and powerful voice for Illinois agriculture. What a fitting time to salute the visionary leaders, county Farm Bureau managers, employees, and most importantly our farmer members who make this organization great! Happy 100th IFB!!

Posted by Unknown at 5:18 AM No comments:

Transportation Building: IFB Home for a Quarter of a Century

At the time of its completion in 1911 the Transportation Building was the second tallest building in Chicago at 231 feet. Built on a narrow slice of ground between Federal and Dearborn streets it is only 67 feet wide but the length of a football field. It became the third home for Illinois Farm Bureau (IFB) and it's affiliates in Chicago, in just two years time, but one we finally decided to stay at – 25 years altogether. In 1927 we added offices for the newly formed Illinois Farm Supply, IFB affiliate Illinois Agricultural Mutual Insurance Company started selling auto insurance to members out of the 608 S. Dearborn address and a Chicagoan by the name of Elliot Ness joined the U.S. Treasury Department. The following year Ness moved to the Justice Department and was given the assignment of bringing down notorious Chicago gangster and bootlegger Al Capone. Ness chose the Transportation Building as his crime-fighting headquarters.

One of Capone's men paid a visit to Elliot in his Transportation building office one day and offered him an initial $2,000 bribe followed by an extra $2,000 for every week he cooperated and left Al Capone's interests alone. An enraged Ness kicked the man out and called in the press proclaiming that neither he nor any of his loyal G-men could be bought and the their mission could not be stopped. The next day a Chicago Tribune reporter referred to Elliot and his squad of nine G-men as "The Untouchables." Eventually "The Untouchables" would being down Al Capone's gang and his grip on the Windy City. Capone was eventually sent to prison for 11 years on tax evasion charges linked to his illegal breweries. Imagine President Earl Smith riding the elevator with a Tommy gun toting G-man up the Transportation Building elevator! IFB Presidents Sam Thompson, Earl Smith, and Charles Shuman would each have had an office in the building. Eventually continued growth by IFB and its affiliates forced another move to IFB's last residence in Chicago – the American Bankers Building at 43 E. Ohio Street.

In the 1970s the 22-story Transportation Building was boarded up and inhabited only by homeless squatters. But at the end of that decade the building saw an amazing urban renewal into loft style apartments. Today the Transportation Building is home to upscale condominiums with restaurants, businesses and convenience stores filling up the ground level.

If you are coming to IFB's Annual Meeting in Chicago this year stop by the Archives display for directions to the Transportation Building. From the Palmer House it's only about a ten minute walk to see a piece of Illinois Farm Bureau and Chicago architectural history for yourself. 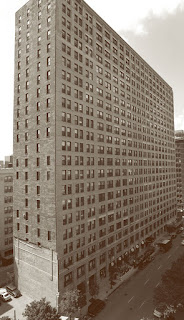 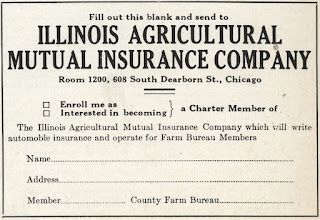 Posted by Unknown at 1:30 PM No comments:

We take it for granted today that acquiring and keeping Illinois Farm Bureau (IFB) members is vital to the continued well being of our organization. Just last week I worked on a graphic for the IFB Board that shows the annual membership breakdown for each district. Today we pay close attention to the ups and downs of membership, but in the early days you couldn’t even be a member of Illinois Farm Bureau. Individual membership in IFB wasn’t started until 1919 ­– a full three years after the organization was founded. Before that only the county organizations were the actual “members” of IFB.  Probably no other membership drive has been more strategic and vital to our existence than that first one in 1919. Vice-President Jacob Sailors was appointed to the task of recruiting members. Of the 59 counties who were part of Illinois Farm Bureau in those early days Mr. Sailors oversaw the membership drives in 32 counties. He hired individuals for $10 a day plus expenses to solicit membership. By the end of the 1919 he had some pretty impressive numbers. In the 32 counties he was directly responsible for membership went from zero to 40,551. In the remaining 27 counties where Jacob was not directly involved total membership was only 6,549.  Vice-President Sailors worked his membership drive magic in just over half of the counties but was directly responsible for 86% of the new members. In today’s dollars Jacob Sailors infused the young organization with $3.45 million. A great start to address the taxation, legislation, and transportation issues of the day. Thank you Jacob Sailor for believing in our organization and starting us out on a solid financial foundation. With your help we were poised to accomplish great things well into the next century. 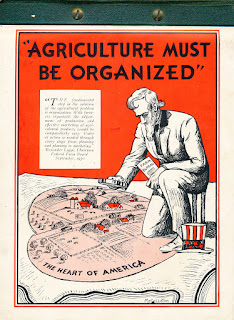 
Sometimes links in history are like seeing your reflection in a rippling pond. The image isn't exact but the similarities are amazing. I had a historical reflections moment this past weekend watching 10 Things You Don't Know About: The Hoover Dam on the H2 Channel. The host, Henry Rollins, pointed out that a beloved black labrador-mix mascot was buried at the Hoover Dam site. The dog had been born under one of the men's barracks and was quickly adopted and cared for by the workers who gave their spare change during the Great Depression for his care. Their mascot even made jaunts into Boulder City with the crews in the evening where townspeople gladly gave up bits of ice cream and candy for him. The diet proved a little unhealthy for the lab mix and so this ad ran in the local paper:

I Love Candy but it makes me sick

It is bad for my coat

Please don't feed me any more.

One hot day the dog was resting in the shade behind a vehicle and was accidentally run over. Burly and gruff men, with tears in their eyes, cried as they jackhammered a grave on site for their beloved black lab-mix mascot. 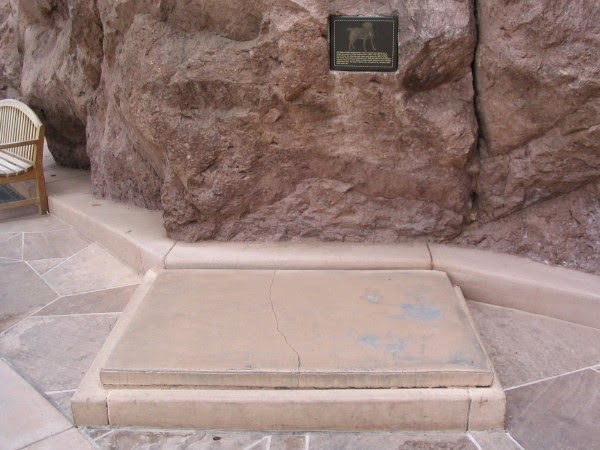 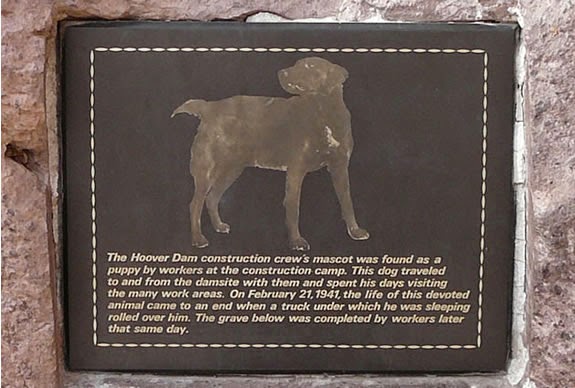 So too here at the IAA Building we have a grave for our beloved mix-breed mascot Lady. Lady too found the allure of a construction site and kept wondering off from her home on Sunset Road. Lady had chosen new owner, Chuck Russell from the IAA Building Department, and her original owners Dr. & Mrs. Irwin eventually agreed to let Chuck take care of her. In the middle of 1961 Lady was known by high-heeled secretaries and suit and tie attorneys alike who were now working in the completed building. Like the Hoover Dam Dog, Lady also met an untimely end due to a vehicle when she wandered onto Towanda Avenue in December 1961. IAA Attorney George Merker, Jr., who was in charge of the entire move from Chicago to Bloomington, was especially attached to Lady and he purchased a small casket for her and also the grave marker found today on the southeast corner of GROWMARK's parking lot.

Two stories in history linked by construction and canine companionship. 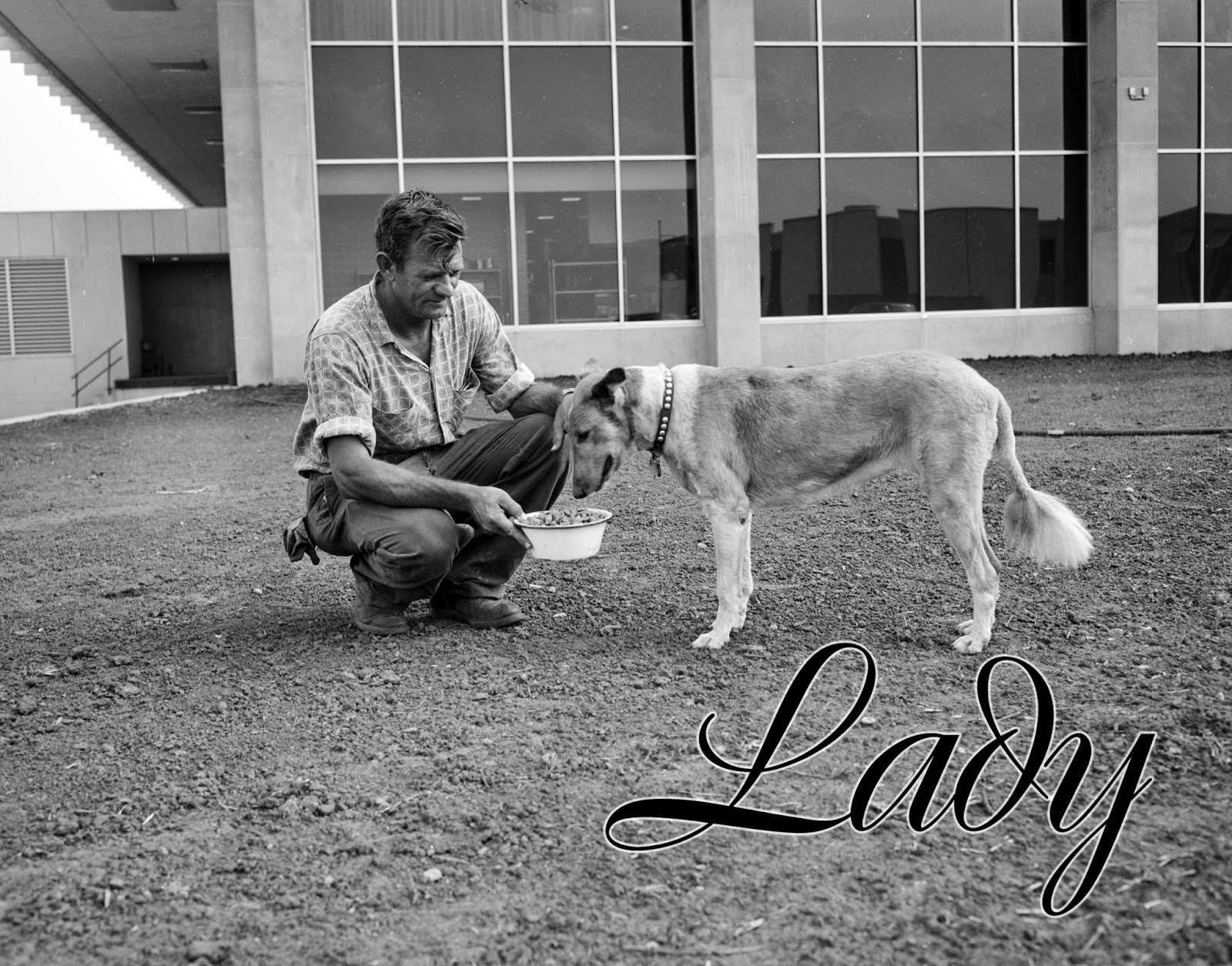 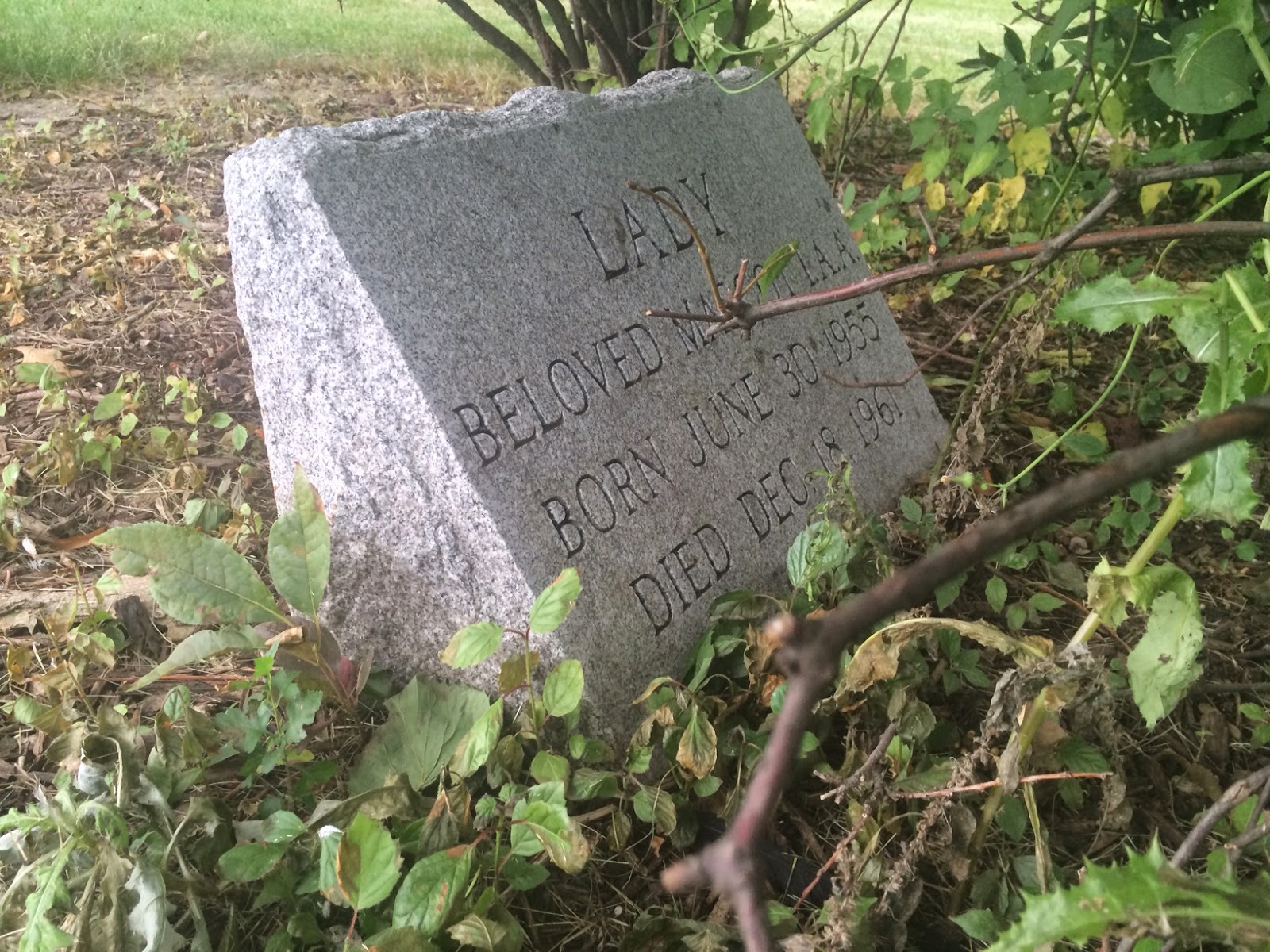 Special thanks to Kate Kelly at AmericaComesAlive.com for her additional info about the dog at Hoover Dam.
http://americacomesalive.com/2012/08/19/the-dog-on-the-hoover-dam/#.VCGsKNzse2Q
Posted by Unknown at 10:42 AM No comments:


Due to the striking similarities between the IAA Building in Bloomington and IDOT's Headquarters in Springfield along I-55 the question has been raised - did they share the same architectural firm? 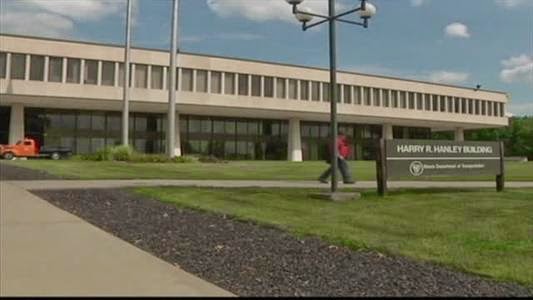 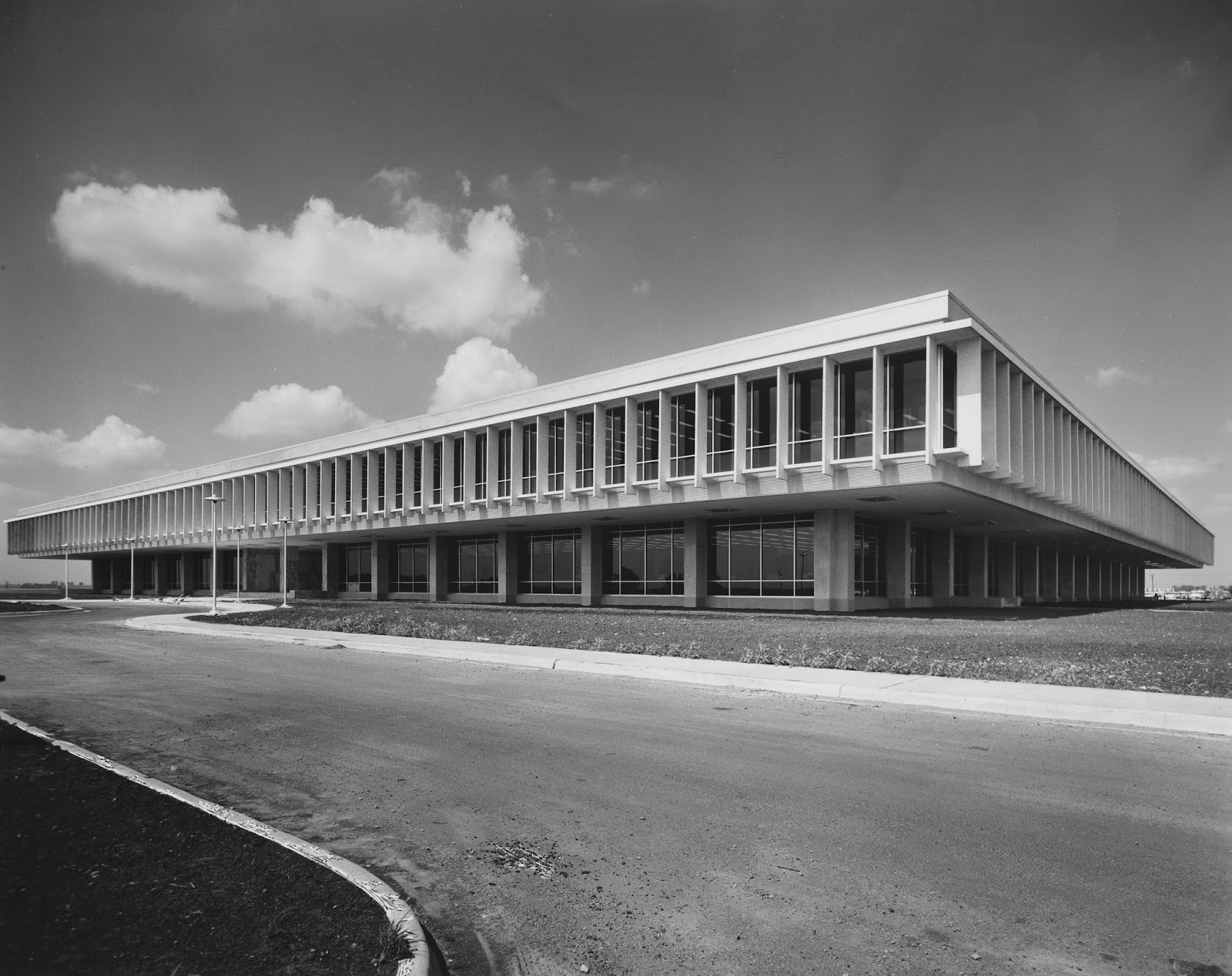 Despite the very similar look the answer is no. The IAA Building was designed c. 1959 by Graham, Anderson, Probst & White of Chicago who also designed such iconic buildings in the Windy City as the Wrigley Building, Merchandise Mart and Shedd Aquarium. The IDOT Building on the other hand was the creative genius of Ferry and Associates of Springfield. The IDOT Building was designed at least 13 years after the IAA Building but who knows like it's said, "imitation is the highest form of flattery." 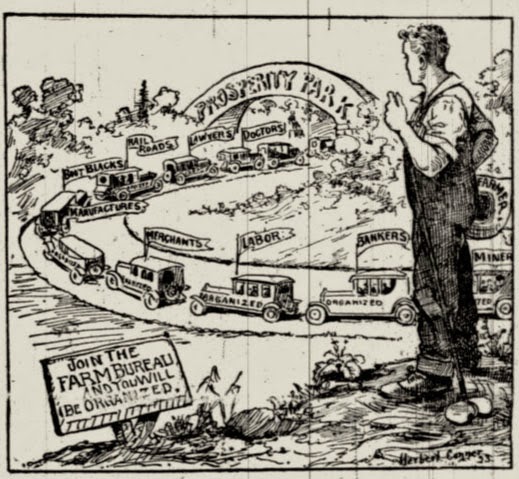 This first cartoon illustrated how other occupations were put on the road to prosperity through organization and encouraged farmers to do the same by joining Farm Bureau. Herbert drew his cartoons for the IAA Record on the dining room table after a hard day's work on the farm.
Mr. Conner was also an accomplished painter with pieces in several public libraries along with four works illustrating Illinois history in Sherman Hall on the campus of Western Illinois University.
Below is a 1928 untitled oil painting from the Pankhurst Memorial Library in his hometown of Amboy. 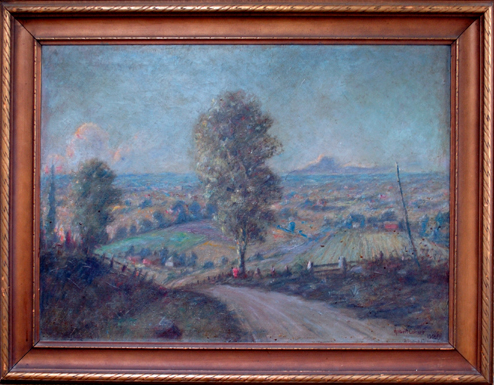